Remember this? Someday I'll take you to Italy for your birthday. Um, not this year or next year. Or probably the year after that. But eventually it will happen! Because you are just that awesome.
at: 10:31 AM No comments:

Email ThisBlogThis!Share to TwitterShare to FacebookShare to Pinterest
tagged: birthday wishes, my mom is awesome, photos This wall was one of my favorite places in Colonia; I don't actually remember why.
at: 2:44 PM No comments:

remember when I went to Argentina? Hey, you know how I posted those photos from Louisville? I took way more in Buenos Aires, and I hardly posted any of them. I'll be doing that over the next few days. Something to look forward to, right?
at: 11:25 PM No comments: There was an earthquake this morning! I slept through it, but my hotel roommates both woke up. There were aftershocks during a workshop on archiving emails & websites (way more complicated than you would think). They weren't strong at all, but it is so weird to feel the entire room shake.
at: 3:35 PM No comments:

I'm sure this is spam, and I know I shouldn't open it, but I really want to. It really looks like an actual email, with sentences and question marks and exclamation points and everything. Seiko tiramisu, that's just great.

1. So I'm writing this paper for my Colonialism seminar. I have to talk about a bunch of different readings, mostly related to education and architecture and display in the later imperial period. That part isn't necessarily difficult--I did all the reading and I basically understand what all the authors are trying to say--but we also have to make a larger argument, and I just have nothing interesting to say. I don't know, I may have figured out an approach, but it's so difficult to write this paper because I just do not have anything interesting to add.

2. I'm going to New York in May. I think I may have already mentioned that, but I bought my ticket today. I'm leaving the week after finals, and I'm staying for eight days. It will be awesome.

3. I'm going to Kentucky on Thursday, for the Midwest Archives Conference Annual Meeting. I'm sort of not sure why I'm going, as it will cost money and I have not even taken any archives classes, and I'm seriously not going to have any background knowledge when I get there. But on the other hand, I'll get to go to Kentucky (which I probably would not ever have done otherwise), and it's not actually that expensive, and I'll probably learn something, and it's always good to make contacts or whatever. Right? I don't know, I'm just hoping I'll be able to buy some quality bourbon while I'm there.

4. I made a really awesome bag this weekend. After much consideration, I've decided to list it on Etsy, because much as I want to keep it for myself, I also want to keep having money to buy food, and that's going to be difficult since I keep going on trips I can't afford. I'll post a photo of the bag tonight or probably tomorrow, after I list it on Etsy.

5. I can barely write a coherent sentence. That does not bode well for the paper I've been working on for the past three hours!
at: 11:49 PM No comments:

at least it's not snowing

[It is raining like a motherfucker outside. I am staying inside for the rest of the night for sure.] 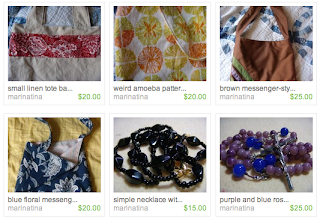 Look at all that pretty shit. Why do I have such a dirty mouth today? I made all that stuff this month, or at least I listed it all this month. No one has bought anything yet, which sucks, but to be fair, it's only the tenth. I should probably wait at least a week before I start to panic.

What else? I'm working on summer plans, which are looking pretty awesome so far. I'm taking Information Policy and doing an independent study for history (if I can find a professor to supervise me), and since I'm taking the policy class online, I'll be able to spend so much time at home. My mom found an amazing sewing machine on craigslist, so I'm looking forward to spending a lot of time at my parents' house, sewing and enjoying the air conditioning. Oh, and doing homework and utilizing the high speed internet. Obviously.

Oh, and I guess I'll also be able to see a lot of Nathan if I'm home all the time this summer. He was here most of the week; pretty sweet, right? We made tacos, and he had the genius idea to use goat cheese along with the cheddar. Also, he bought me beer and also a coffee. Having a boyfriend is awesome. Also, the Peanut Butter Cup coffee at Fuel Cafe is awesome.
at: 5:10 PM No comments:

Email ThisBlogThis!Share to TwitterShare to FacebookShare to Pinterest
tagged: etsy, I miss you, photos

This just makes me sick.

I'm not sure who the Russian is who actually took the pictures or where they were taken, but the photo is from the Livejournal of Глеб (jst_ru) via Gawker. There are more photos.
at: 8:48 PM No comments:

I went to a symposium today, scheduled in conjunction with the Foto exhibition at the Milwaukee Art Museum. The papers presented at the symposium were interesting, and the exhibition was amazing. I'm going to go again soon, and I have renewed my commitment to saving money so I can go to Prague soon. The exhibition is about Central European photography, you see.

I would write more, but I was starving after the symposium and somehow ended up buying lasagna and pinot noir for dinner, so I am going to go lay down and wait for the two glasses of wine to wear off. I am über classy.
at: 7:17 PM No comments:

this one's for kira peaches and banana
Originally uploaded by marinatina
Guess where I'm going in May?

Peaches and Banana are going to be full-grown cats. I don't know if I'm ready for that.
at: 9:36 AM 1 comment:

There's this Allstate commercial, and it's all shots of freeways and people running on treadmills and sitting at a computer and eating dinner, except they're doing it in the middle of the freeway, and I couldn't tell you why, because I was too distracted by the small print at the bottom of the screen at the beginning of the commercial--"Do not attempt." Do not attempt to run on a treadmill in the middle of the freeway. Really? That's just... I can't tell if I'm angry or just sad for this country that things like that have to be pointed out.

Related: You're tired of me bitching about commercials, aren't you? Me too. I really need to stop watching internet TV.
at: 8:06 PM No comments:

Hulu.com is awesome. Have you heard of it? They have a whole bunch of TV episodes and movies online, and it's run by Universal and News Corp., so it's legal. And they have a lot of shows, and it's pretty high-quality, and it's really fast. Totally awesome, and way less guilt-inducing than watching TV on, um, sites that aren't technically, you know, exactly completely legal. Not that I ever did that!

Anyway, Hulu.com is awesome, but here's the thing. They have to find more advertisers. I don't know, maybe it's hard, maybe people don't want to pay for internet ads, I don't know. I do know that I will never, ever watch Street Kings ever, and I'm not feeling too good about stop-loss either. I've been watching old episodes of Bones, and every single episode is sponsored by one of those two movies, most of them by Street Kings. If I have to hear that fucking Street Kings commercial one more time, I am going to fucking scream. It wasn't that bad the first few times, but the exact same commercial runs five times during every episode, and I've watched most of the first season over the past week (stop judging me) and oh my god it starts out "I am the American dream" and I just want to fucking stab someone every time I hear it. Commercials are annoying enough, but when you have to listen to the exact same commercial repeatedly, it induces irrational rage and not the irrational consumerism I'm assuming you intended.

This also applies to USANetwork.com and their fucking Bertolli commercials. Find another advertiser! Or be like ABC.com and advertise your own shows! Just stop playing the exact same commercial over and over again.