What we have right here is a life-changing moment, for me of course. Like I care about anyone else's life and/or moments! (Kidding!) I have made a decision, actually it's something that I've been thinking about for awhile, and I just took the second-to-last decisive step. But I can't talk about it until I take the last decisive step, so whatever will I do? This is just boring and annoying if you're not me! (Unlike everything else I write, obviously!)

All right. Never mind all that "my life is changing in a way so exciting I can't actually talk about it, woops, why did I even bring it up," check out this clip, hereafter known as The Greatest Thing I Have Ever Seen on YouTube Ever. It starts slow, but it gets so awesome.

It seems you left a bottle of Hennessy in the cabinet. You don't seem like a cognac person; maybe Max left it here? Maybe you bought it for a party? Who really knows; the point is, I love you so much right now. Oh, also, you know those little water glasses you got at Ikea? They're just the right size to pretend that they're tumblers ("lowball" glasses? rocks glasses? Old fashioned glasses? Confusing!).

In conclusion, you are the best. Let's video chat soon!

All right, I remember what I wanted to say.

(This is apropos of absolutely nothing, I swear; this is not in response to anything that's happened to me recently.)

Maybe you haven't gone to the effort to figure out your ideological position when it comes to feminism. Hey, don't feel bad, I'm just starting to figure it out for myself, and not only am I a girl, but I spend lots of energy thinking of myself as politically aware and/or informed. (Ha!) The point is, if you believe men and women are equal, you are a feminist. There is nothing wrong with that. You don't have to act a certain way, or believe anything else. You can be a feminist and like shopping and boys; you can also like non-stereotypically girly things. You can be a feminist and still not really care about whether something is stereotypically girly or reinforcing the patriarchy or setting back the women's movement. It's cool; all that shit takes tons of energy! Who has the time?

But it is important to realize that if you believe men and women are equal, you are a feminist. It might even be important to realize that even if you don't really care about it, there is a patriarchy, there are still institutional biases towards women (just like there's still shit tons of institutional racism!), women are still not equal citizens in the United States. You don't have to sit around talking about it; seriously, I won't think less of you--talking about this shit takes a lot out of you.

What's important is that you are a feminist, because you believe that men and women are equal.

And if you don't, then honestly, why are you even reading this?

Next week's lecture will be about why it's culturally insensitive to refer to the United States as "America" (it's almost Independence Day, so it'll even be topical!!!).
at: 2:45 PM 3 comments:

what the fuck was I thinking

I just have one thing to say today--I love New York.

Ha! I totally have more to say! Except I decided against bitching about how everyone is against me, I'm totes the victim, poor poor Marina, so now I've totally lost my train of thought.

Last Friday, I bought a membership at the NYU gym for $30 for the rest of the summer. Gym visits so far: 0. In my defense, it has been a busy week.

Oh, motherfuck, there was something else I was going to talk about, but I totes forgot.

this is why i can't have nice things

It has recently come to my attention that I will turn 23 in less than a month. I shouldn't freak out... right? I mean... right? Fuck.

I want to say that my procrastination has reached epic levels, but there's a little thing called "freshman year" standing in the way. I think I've changed though, because I'm much less willing to feel sorry for myself or let myself be all dramatic about it. Things will get done eventually, and if they don't... fucking whatever man. I'm old now, I don't have to care if other people think I'm a lazy asshole who never finishes anything when she says she will.

In other news, this is Lenny. 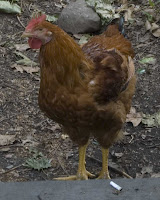 We met at Fort Tryon Park, and wow, Lenny caused far more trouble than you'd expect. He was hanging out on this out-of-the-way path, walking around, clucking and pecking at the dirt, as roosters are wont to do. I walked down some stairs so I could take a picture, and then I felt guilty about taking a picture and walking away, so I decided to call 311 (automated greeting--"Thank you for calling New York City"), mostly because I couldn't think of anyone else to call. They transferred me to Animal Control, and I swear to god, this is an unabridged transcript of said call--

Animal Control: Hello, Animal Care.
marina: Hi, I'm in Fort Tryon Park, and there's a rooster walking around--
Animal Care (?): We don't do roosters; you'll have to call Wildlife.
marina: Sorry, 311 transferred me to you, and there's this rooster...can you transfer me to them?
Animal Care: 311 doesn't know what they're doing. You'll have to call Wildlife yourself.
marina: Okay... well, can you give me the number?
Animal Care: No, you'll have to look it up in the yellow pages.
marina: What?! I'm in the fucking park! I can't look it up! What the hell is wrong with you?!? [etc]

I called 311 again and asked to be transferred to "Wildlife" but instead the operator took my information to send it to the parks department. When she asked for my phone number so they could call me to follow up, I finally figured out that poor Lenny was never going to get the help he needed. Why the fuck would I want them to call me to follow up on a "wildlife sighting"? It's a rooster! Come pick up the rooster before someone catches it and brings it back to the cock-fighting den it escaped from!! Poor Lenny is going to end up at the live poultry place on Amsterdam (La Granja!), I just know it. I'm sorry, Lenny. I would've brought you back to my apartment, but I think the cats probably would've killed you. Plus, you kind of smelled.
at: 11:55 AM 2 comments:

Never grow up. Being an adult is lame-o.

My parents were here for what seemed like five minutes. I'm consoling myself with the thought that I'll be home in two and a half weeks.

I am currently stalled, devoid of motivation to do anything other than listen to music and print photos. Even the printing thing is a stretch. Please tell me that I'm being ridiculous.

I went for a run yesterday. I was lying (laying? fuck!) on my bed, listening to Sleater-Kinney, and I thought to myself "this would be so much better if I were moving." So I got dressed, found my running shoes (underneath my skates!), and went for a run through the park. It was sort of raining, which made the stupid heat much easier to deal with, and I really actually enjoyed it.

I also saw Knocked Up last night. I realized a few things--

2. I will see any movie that involves either Paul Rudd and/or Seth Rogan. Or! Even better--a Paul Rudd/Seth Rogan buddy comedy!

3. I still do not want to have babies, ever.

4. Even with Paul Rudd and/or Seth Rogan.


I've decided that I need to play hockey next season. I desperately need to get into shape before the winter, so I guess it's good that I suddenly want to go running.
at: 11:54 AM 8 comments:

Email ThisBlogThis!Share to TwitterShare to FacebookShare to Pinterest
tagged: hockey, knocked up, running

1. I went out drinking twice; both times were lovely. I went to the Packers bar last night, and it was awesome (obviously).

2. Double or Nothing was pretty amazing. I hate to be all sincere about it, but I haven't been affected by a book like I have by it in awhile. It didn't make me all emotional or anything, but it made me think about what a novel is, what fiction is about, more than anything has in awhile. I guess I'm not supposed to call it experimental; but it pushes the boundaries of what a novel is supposed to be. It doesn't really have a plot, except it sort of does, and it's impossible to tell where the lines are between the author and narrator and protagonist. It is a weird strange awesome book.

3. Next on my reading list: Ficciones, The Plague, Slaughterhouse Five, finishing that other book about Prague that I started in MKE.

4. I'm watching Hearts and Minds, a documentary about the Vietnam War. If I do in fact focus on US History when I go back to grad school, it's going to be a depressing 2-3 years.

5. I'm currently avoiding several responsibilities. I need to deal with them this weekend, but I am (amazingly) not very anxious about it. I will finish things when I can finish them.

IT IS 4:30 IN THE MORNING; STOP PLAYING YOUR STUPID CAR RADIO AT STUPID FULL VOLUME.

all right then. he stopped, just now. apparently my passive-aggressiveness worked!
at: 3:28 AM 2 comments:

Email ThisBlogThis!Share to TwitterShare to FacebookShare to Pinterest
tagged: drunk, Harlem, it's so fucking hot out

The coffee guy gave me free coffee yesterday (AGAIN). I have to assume this means he wants me, right?

After I picked up my free coffee, I went to work, suddenly felt mega sick, and went home. I slept for approximately eleventy million hours, and now I feel much better.

Double or Nothing is so good, so much better than I was expecting. More details when I finish it.

Everything in my apartment is covered with a thin layer of cat hair. Apparently cats shed? Stupid cats.
at: 9:36 AM 9 comments: